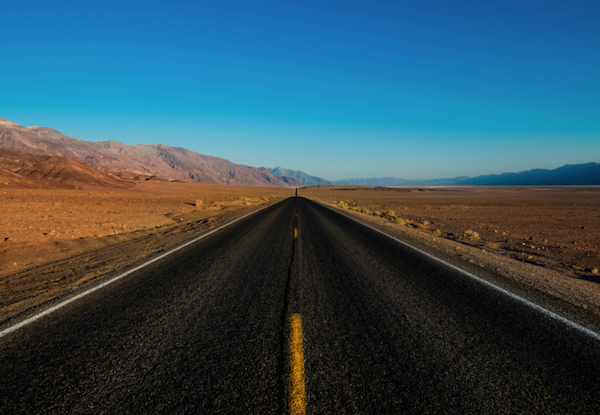 A 27-year-old man from Atlanta has become the fastest person to drive across the United States, obliterating the previous world record set in 2006. Ed Bolian whizzed his way from New York to Los Angeles in a mind-boggling 28 hours 50 minutes, breaking the prior record by more than two hours.

Bolian, who had wanted to make the record-breaking attempt since he was 18, says preparations for the journey took several years. First, he had to choose a car that would be suitable for such an intensive voyage. He settled on a 2004 Mercedes-Benz CL55 AMG, although the standard model wouldn’t exactly do-Bolian outfitted the car with additional fuel tanks, bringing the car’s fuel capacity to 67 gallons. More gas meant fewer pit stops to fill up the tanks, with Bolian’s car able to travel 800 miles before it needed to be topped up.If that sounds like a really long way to drive before getting a break, or you know, taking a leak, don’t worry because Bolian was prepared for that too. He traveled with a team of two others who could take turns driving, and as for the bathroom part, well, the car was stocked with extra bottles and bedpans in case of emergencies.

Bolian also installed police scanners, radar detectors, GPS units with traffic capabilities, and a whole host of other gizmos into his vehicle. His car also boasts a CB radio and giant antenna that allowed him to call out to slow trucks on the road in an effort to get past them faster.

Karol Gajda is on a solo mission to conquer every roller coaster in the United States – and he’s given himself just three months to do it.

Karol’s ambitious coast-to-coast roller coaster ride started last Saturday, and he’s already faced a few ups and downs. His dream was to travel cross-country in a hearse or similarly quirky car, but he had to settle for a more modest vehicle (although he hasn’t yet divulged any details for fear it might break down). He also ripped his shorts at his first stop, Michigan’s Adventure. Let’s hope he brought more than one pair for the trip!

Why is Karol on this mission? Because he wants to. “It’s that simple,” he writes on his blog, Roller Coaster Tour, where readers can keep track of his adventures as he circles the States.

Above, Karol talks more about his quest and encourages followers to meet up with him at parks. Luckily, the coaster enthusiast did have the foresight to get cool rock band-style t-shirts with tour dates on the back, which will make him easy to spot at theme parks during the busy summer season.

Are you looking for a winter wonderland for the Christmas season? New England is a natural destination. There are plenty of deals to be found, with packages that won’t force you to choose between your trip and the number of presents under the tree. Check out the inns below from New England Inns and Resorts to see for yourself what await!

1. The Stepping Stone Spa, Lyndonville, VT The Kingdom Trails Winter Adventure package at The Stepping Stone includes two nights at this bed and breakfast, daily breakfast, two adult tickets for snowshoeing or cross country skiing at Kingdom Trails and a $50 voucher for dinner at Jupiter’s Restaurant. Rates start at $157 per person, based on double occupancy, and the deal runs from December 17, 2010 to March 20, 2011.

2. The Wentworth, Jackson, NHTake a look at this property for the Jingle Bells Chocolate Tour. For a rate that starts at $208, you’ll pick up a night at the Wentworth, an hour-long sleigh ride through Jackson Village (with actual jingle bells and chocolate snacks), a four-course candlelit dinner for two and a full breakfast the next morning. The deal runs from November 27, 2010 to December 18, 2010.3. Cranwell Resort, Spa and Golf Club, Lexington, MA Feeling the urge to hit the slopes before the end of the year? Check out the Berkshire Ski package at this property. For $140 per person midweek or $185 on the weekends, you can score a night at Cranwell Resort, unlimited cross country skiing, a $20 credit at any Cranwell restaurant and full use of the spa. The deal runs from December 1, 2010 to March 31, 2011.

4. The Beachmere Inn, Ogunquit, ME
Ring in the new year at the Beachmere. The New Year’s Eve by the Sea package is pulled together to make the last night of 2010 memorable. The last dinner you’ll have this year includes appetizers, buffet and dessert, not to mention dancing and party favors. Start fresh with a lavish breakfast the next morning. Two-night packages range from $530 to $595, with three nights ranging from $625 to $675.

5. Inn at Ormsby Hill, Manchester, VTVisit the Inn at Ormsby Hill on the first two Saturdays in December for open tours of the inns in the Manchester area. Stay either the night of December 3, 2010 or December 10, 2010, and receive dinner in the evening, followed by a performance of “A Christmas Carol” at The Dorset Theatre. Open house tours run from noon to 4 PM the next day, with the $15 ticket price going to Habitat for Humanity. On your way home, you’ll have the chance to stop by a local nursery and pick up a Vermont Christmas tree to bring home!

Looking to spice up your work routine? Want to travel the country but don’t have the cash to go without a job for an extended period of time? Take a page from Daniel Seddiqui’s playbook. Quit your job and contract yourself out to 50 different employers in 50 states over the course of 50 weeks. You’ll get variety, the chance to travel for a year, and a somewhat steady income. It’s genius.

Bored with his job at an office in Skokie, Illinois, Daniel decided to try something new. Actually, he decided to try something new every week. He resolved to work his way across the US, doing odd jobs in each state. Along the way, he held some jobs he loved (working as a dietitian in Mississippi) and some he loathed (taking abuse from film company execs in LA). He also worked as a border patrol officer in Arizona, helped out a cellar master in Napa Valley, made cheese in Wisconsin, and toiled in an oil refinery in Oklahoma.

Some jobs paid well, like the medical device manufacturer that gave him $2000 for getting the company coverage on CNN, while others, like the gig making furniture with the Amish in Pennsylvania, well…not so much. For that, Daniel earned just $100 for the week.

Daniel says some jobs were more difficult than others, but it seems like one of the hardest aspects of undertaking this project was probably setting it up. Daniel says he estimates that 100 companies rejected his offer per state. But he continued making cold calls and networking and eventually landed all 50 gigs.

So what’s the next job for Daniel? Writing a book about the adventure, of course.

Oh man, do I want to ride along on this one! (In fact, be certain that I will at some point!) My bookstore lovin’ pal Larry Portzline has planned an awesome traveling adventure. The creative genius behind the Bookstore Tourism movement has just announced that he will embark on a 10-week cross country road trip that will include stops at 200 independent bookstores in all fifty states.

What better way to spread awareness of indie bookstores, promote literacy and reading, and spread the word about Bookstore Tourism? Larry will drive across the U.S. and fly to Alaska and Hawaii, celebrating indie spirit all the way. At each bookstore Larry will interview owners, booksellers and customers and ask: “Why do indie bookstores matter?” He’ll post updates, pictures and podcasts on the tour’s blog.

It’s no coincidence that Larry chose “Independence Week” to announce the kickoff of his tour. And what about his April 1, 2008 departure date? “April Fool’s Day seems appropriate for something a little Quixotic like a cross-country trip to support indie booksellers,” he explained.

That’s nine months from today, so hopefully it gives Larry plenty of time to line up the sponsorship he is seeking to help defray the cost of the trip. He’ll also be soliciting folks for suggestions about bookstores to add to his itinerary; and will invite fans to make a donation and ride along with him for a day or two. “We won’t have luxury accommodations, but it’ll be a ridiculous amount of fun,” he said.

The national tour is merely a variation on the group bookstore road trips that he and others have led around the U.S. Except, as Larry makes sure to point out: “Instead of a luxury motorcoach, we’re taking my minivan. And I get the final say on the music choices.” Seems fair and sounds like loads of fun. But Larry — will you be pimping-out the van with a super cool bookstore-on-wheels motif?

Here at Gadling, we’ll be sure to keep you updated on tour plans as things progress. Kudos to Larry for a most excellent road trip idea.