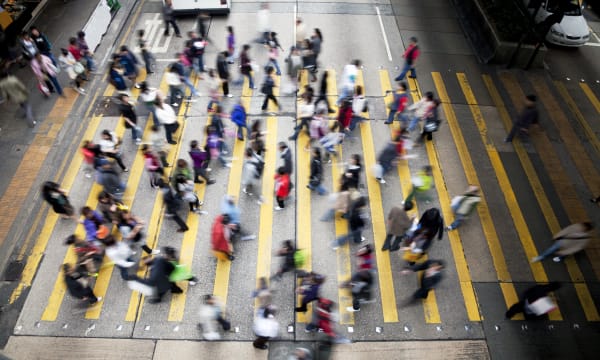 When Sunshine Aquarium in Tokyo wanted to stand out among other tourist attractions in the busy city, they turned to penguins. Visitors using the Penguin Navi app on their wireless device just follow the little digital birds through the city, which leads them to the aquarium.

The idea taps the world of augmented reality and has been a hit with tourists. Without changing any exhibits, Sunshine has increased its attendance by more than 150%.

Although the number of airline passengers has skyrocketed over the past decade, China’s infrastructure has been unable to keep the pace. And as the number of delayed flights have risen, so too have the accounts of passenger brawls and acts of civil disobedience.

The problem has gotten so bad, the employees of at least one Hong Kong airline are learning kung fu as self defense.

Beijing Capital International is the worst airport for on-time departures, with an average delay of nearly 90 minutes. Another Chinese airport, Shanghai Pudong International, ranks fourth on that same list. Fewer than 30 percent of flights leaving Beijing airport are on time.

China plans to invest $230 billion to build 55 new airports in the coming decades, including a second in Beijing that will become the world’s largest when completed. But that’s little solace to the passengers who are constantly bumped from their flights now.For more than a year, passengers — mostly Chinese, but some American and other nationalities — have routinely acted out against airline staff. A three-day and multiple cancellation delay for a 2012 United flight from Shanghai to Newark led to frazzled nerves and fisticuffs. After baggage personnel were caught manhandling travelers’ luggage, they were attacked and beaten by passengers. After the passengers were finally able to make it to their destination, they received $1,000 vouchers for a future United flight, although no one seemed to be in a hurry to use it.

Also in 2012, 20 or so angry passengers angered by a 16-hour flight delay, stormed the Shanghai runway, narrowly missing an oncoming plane. In July of this year, 30 other irate passengers stormed a runway in Nanchang after a seven-hour delay. The Shanghai passengers would later receive about $160 in compensation from the offending airline.

With no end in sight to delays, the problems seem to be worsening — more than 26 fights were broken up at Chinese airports between May and August of this year. Some of these brawls have sent airport employees to the hospital with severe injuries.

Luckily there have been peaceful protests as well. Last year a group of stranded passengers took over the public announcement system to sing songs after airline staff deserted the terminal.

What are the main reasons people travel? To see the world, gain new perspective, learn about other cultures, get a photo of themselves in front of a famous destination. Let’s be honest, in the world of social media, the latter is of the utmost importance, so important that some people will take a fake background rather than the real thing.

Five places you can snap a fake tourist shot:

1. Hong Kong with a bright blue sky
When it’s too smoggy in Hong Kong for a blue sky (and most of the time it is) you can still get your photo taken in front of the city’s skyline, thanks to a fabric backdrop. Because nothing says “I’ve been there” than taking your photo in front of a colored sheet.

2. Paris… in China
Can’t make it to the real Paris? There’s always Vegas. Or in China, where a remade version of Paris outside of Hangzhou isn’t the City of Light, it’s more of a creepy deserted ghost town. There’s even a 108-meter replica of the Eiffel Tower, which is perfect for when newlyweds want a romantic backdrop without traveling to Europe.

3. Afghanistan… in California
Given the US military’s presence in the Middle East, it’s no surprise that they would work hard to train soldiers on the ins and outs of where they will be based. And what better way than with a mock Afghan village? Actors on the Fort Irwin base in California create a fake Afghan village, selling plastic loaves of bread and fake meat to provide some sort of cultural context for military personnel soon to deploy. Even civilians can visit, checking out the village and chatting with soldiers afterwards. Obviously much more less complicated than traveling to Afghanistan.

4. The Taj Mahal… in Bangladesh
Local wealthy Bangladeshi filmmaker Asanullah Moni was apparently tired of traveling to India to see one of the new seven wonders of the world, the Taj Mahal, so he built one himself. The structure cost $58 million to construct, and took only five years to build; lightspeed compared to the original building’s construction, which was built over two decades in the 17th century. So thanks to Moni, Bangladeshis can snap their picture in front of the iconic architecture without ever leaving their home country.

5. The Titanic… in the Southern United States
Just because the real boat sank, doesn’t mean you can’t get your photo taken in front of it. Just plan a trip to Pigeon Forge, Tennessee or Branson, Missouri where you’ll find 30,000-square-foot replicas of the ship that sank in 1912. Welcome aboard.

A man is being questioned by authorities after he claimed to have poisoned everyone traveling on United Flight 116. The flight, which was making its way from Hong Kong to Newark’s Liberty Airport, landed at 1:34 p.m. today, several hours after a male passenger made the frightening declaration.

According to news reports, the passenger was in an emotionally disturbed state. He made the announcement about having poisoned everyone on board several hours before the flight was due to arrive in New Jersey.Despite this, the FBI said the decision was made not to divert the plane to a closer airport. Instead, flight attendants surrounded the man along with a number of other passengers who volunteered to help restrain him for the duration of the flight.

Both local police and FBI agents were notified and were ready to meet the plane as soon as it landed. According to an FBI spokesman, there is no evidence that any passengers were actually poisoned.